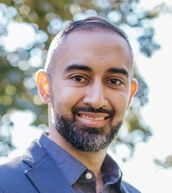 Akshay Kapur is an Executive & Leadership Coach with expertise in 1-on-1 coaching for emerging and senior leaders undergoing major change. He works to improve self and situational awareness in times of rapid growth and transition. His specialty is helping leaders and their teams handle impossible challenges through creating a culture of trust and authenticity. He helps his clients do what feels beyond their reach by creating an entirely new mindset.

Akshay has worked as an analyst, consultant, lead, and executive in healthcare and co-founded  a medical software company in the web & mobile space. Akshay has been practicing mindfulness & meditation for over 20 years. His work has been featured in Conscious Magazine and DailyOM Magazine. Akshay holds a Bachelors of Science in Psychology and a MBA from Cornell University, and a Masters in Economics from the University at Buffalo. He is an avid reader and traveler, living with his wife and daughter in NYC, enjoying the food and culture of the world it offers.

My interest in mindfulness began when I was 14. I used to play ping-pong obsessively at the local YMCA and became pretty good through simple practice. One day, a 60-something Buddhist monk visited the Y and wanted to play a few matches. He beat me every time, and badly. It was embarrassing, even disheartening, and I asked him how he did it. His answer of course, was by paying attention to the present moment.

I devoted myself to understanding what he meant with the same zeal I had put into ping-pong. I visited the local monastery and sat through many zazen practices. I read countless books on Buddhism and Hinduism. I went directly to the scriptures, the Pali texts and then expanded my reading to versions of the Gita, the Koran, the Torah and the Bible.

I dug deeper and eventually found myself studying the idea of non-duality, which kept coming up in every religion, from Advaita in Hinduism, to Mysticism in Christianity, to Sufism in Islam to Mussar in Judaism. Seeing the world as if you created it is a powerful concept that builds an incredible amount of accountability. All of sudden, I became aware of the consequence of every action, of every single decision I made and how it impacted others and myself. But I was still caught in the "return on investment" mindset. I wanted something out of all this exploration. I wanted to be enlightened.

As I continued my inner work, my career evolved from being a manager to a consultant to a manager moonlighting as a consultant. I took on so many projects at once that I burnt out physically in 2008. I was 30 lbs overweight and had just been diagnosed with high blood pressure. It was the proverbial wake-up call. I changed my diet, started exercising and paying more attention to what stressed me out. I was literally more mindful of the way my professional and personal life were shaping my stress-saturated mentality. In order to change my thinking, I had to first change my environment.

I booked a one-way ticket to India to seek haven in my grandparents' home and deepened my practice of meditation and yoga. Barely a month later, I returned to the U.S., beckoned by the six-figure corporate job I always wanted and went right back to the same professional habits that led me to burning out in the first place. This is the first time I truly became aware of my "achieving" mindset, my desire to "be somebody", the desire "to matter." I left that job just over a year later to start my own company.

Going out on my own gave me a glimpse into the risk-tolerant mindset and the close relationship between stress and ambition. I learned the moodiness of self-employment and the desperate immediacy of decisions necessary for executives and entrepreneurs to succeed. Owning my own time meant managing it efficiently. I not only learned more about myself, but also how differently people lived and made their livelihood. I began connecting with more socially-conscious people, and businesses that gave back and put collaborative value first. I wasn't reaching for an end anymore, no ROI, just observing the process.

LEARNING TO BE PRESENT

All the reading, studying, and even meditation had only gotten me so far. I began to seriously practice just being present. Being where I am and who I am in the moment. Following my mind's attention and becoming aware of my underlying values and intentions. I still did yoga, still meditated and still journaled, but I let go of the end result. Of wanting it to get me somewhere. I kept staying focused on the moment as it revealed itself.

It wasn't as smooth as it sounds. It was hard and it still is. "Just being" is probably the hardest thing I have ever done and will ever do - as a professional, partner, and parent. Through life-long conditioning and cultural feedback, I have been trained to get ahead, to be better than who I am today and improve upon who I will be tomorrow.

The idea of "doing" has evolved though. It's only hard when I'm trying. When I'm achieving. When I'm using the old state of mind to approach a new way of being. When I'm truly in the moment, there's no hard or easy, there is only the moment.

WHY I STARTED COACHING

As I continue to explore this unknown, I have found others interested in exploring it with me. Learning it with me and from me, just as I learn from them. Because we're humans being. Regardless of how much we try to be something else, somebody who is better, we eventually come back to ourselves, to explore who we are now. ​

If any of this resonates with you and if you're interested in exploring your self, finding more balance in your life, feeling more fulfilled in every moment, I welcome you to join me. I'm excited about your journey, where you are, and what you're starting.

Contact me if you're serious about your own reinvention.